Best Investments During Inflation; Here’s What Gets Strong Returns

Best Investments During Inflation; Here’s What Gets Strong Returns

So you want to beat inflation with investments?  You’re not alone has we’re in a period where the Consumer Price Index (CPI) is consistently reaching 40 year highs!  And cash is a losing game, along with (currently) bonds, and the S&P 500, both of which are down about 10% as of writing this on March 22nd 2022.

Here we’ll look at what asset classes have done well, from some charts and data!

I've also done a video on this topic covering much of what is in this blog post if you would rather watch it!

The Performance Of Gold During Inflationary Periods

We can’t have a discussion about investing during inflation without mentioning ‘gold’.  It seems like Gold is the unanimous inflation hedge – according to the masses.  But is it really?

This chart from CNBC shows the performance of Gold, along with commodities and REITS during various periods of inflation. 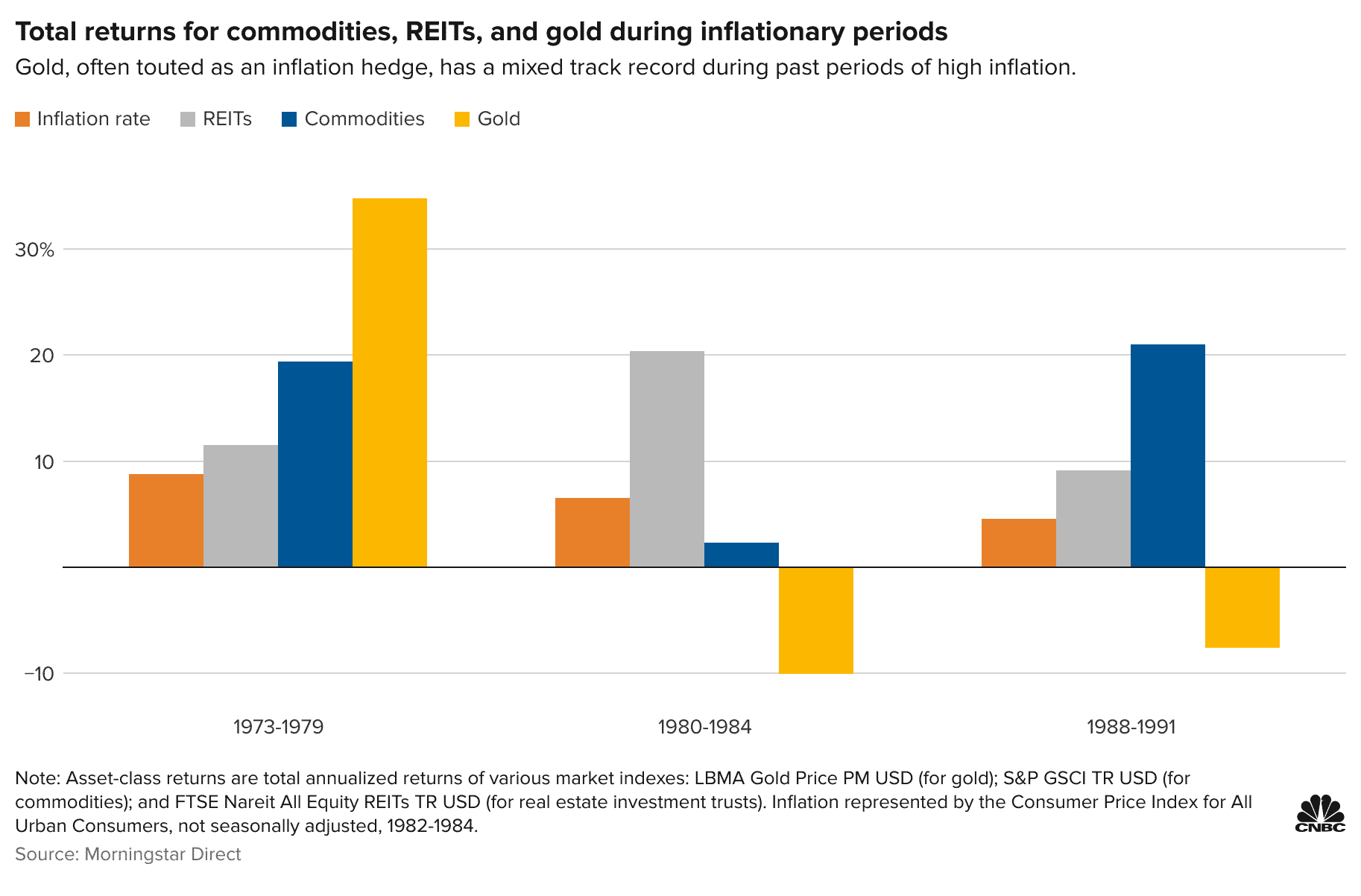 What's cool here is the chart compares it to other asset classes.  Both REITS and Commodities had positive nominal returns across all periods in this sample

Real Assets During In Inflationary Environments

Asset classes with high 'real assets' as their underpinning -- things that are tangible in the real world like railroads, storage companies, and utility companies, seem to fair better during inflation.  My theory on it is that these companies have high switching costs for the consumer with minimal alternative options, along with thin margins that can't absorb changes in the underlying cost thus forcing it to be passed on to the consumer (who can't do anything about it).

This data from Black Rock takes a look at asset classes that have high real asset exposure during inflationary environments. 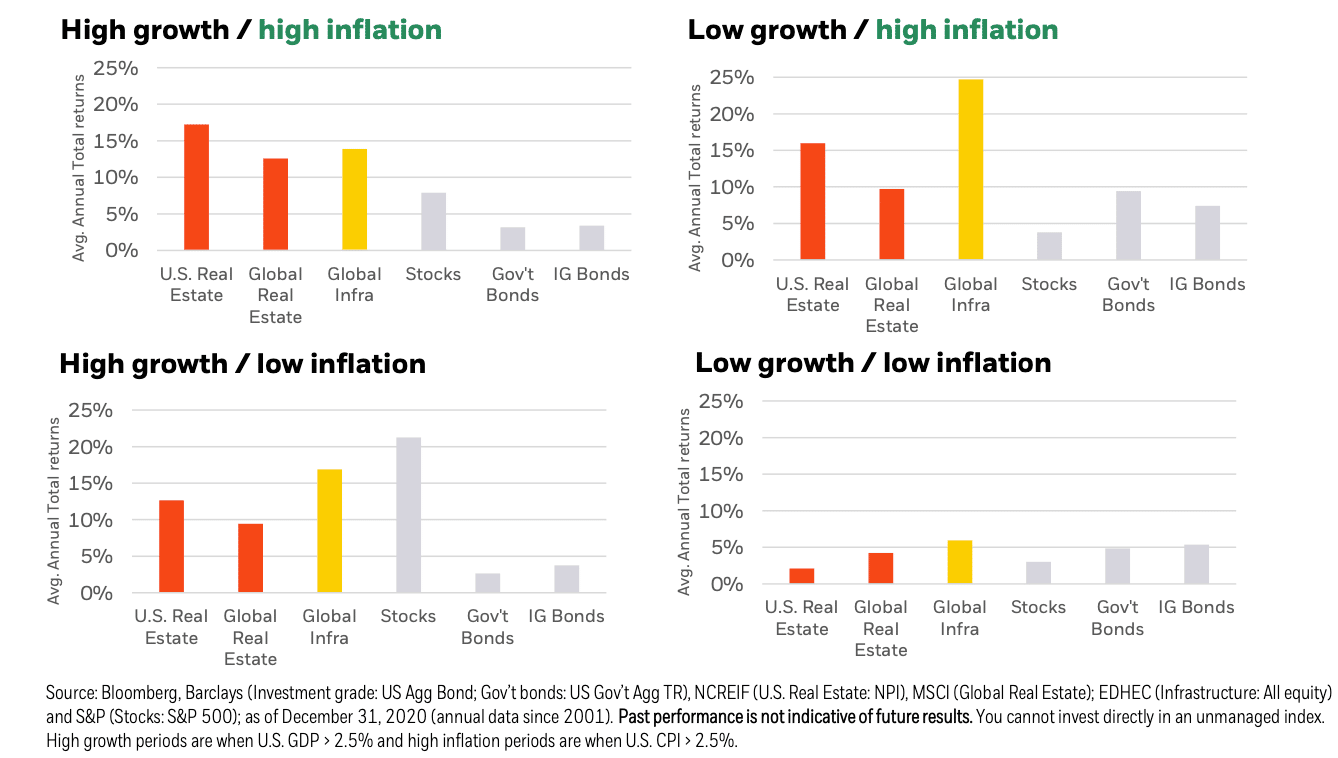 The data is looked at in 4 combinations of inflation and growth going back to Jan 1 2021. High inflation is defined as when the US CPI > 2.5% and high growth is defined as a period when GDP (growth) is > 2.5%.

Notice the graphs on top, during high inflation periods, real estate and infrastructure have done very well.  A couple other observations I make when look at this data:

1. Stocks do incredible during periods of high growth and low inflation, which is what we saw during the 2010s and a rip roaring bull market.

2. Bonds, both Investment grade and government did well relatively well (to their other performance) during low growth / high inflation.  This was surprising to me.

Inflation and Sectors Of The S&P 500

Something I believe many investors completely overlook is the lack of correlation among sectors of the SP500. While many consider the lack of correalation between Large Growth and Small Value to be the best diversification among US Equities, there is further diversification value (or lower correlation) between the energy and tech sector.  Check it out.

Considering the lack of correlation among sectors, it's reasonable to expect sectors perform wildly different during inflationary periods.

And that's what Hartford Funds looked at in this chart.

On the Y axis is the level of outperformance vs inflation (real return) and on the X axis is percent of time with positive real returns over the rolling 12-month period.  This chart is based on data from 1973-2021 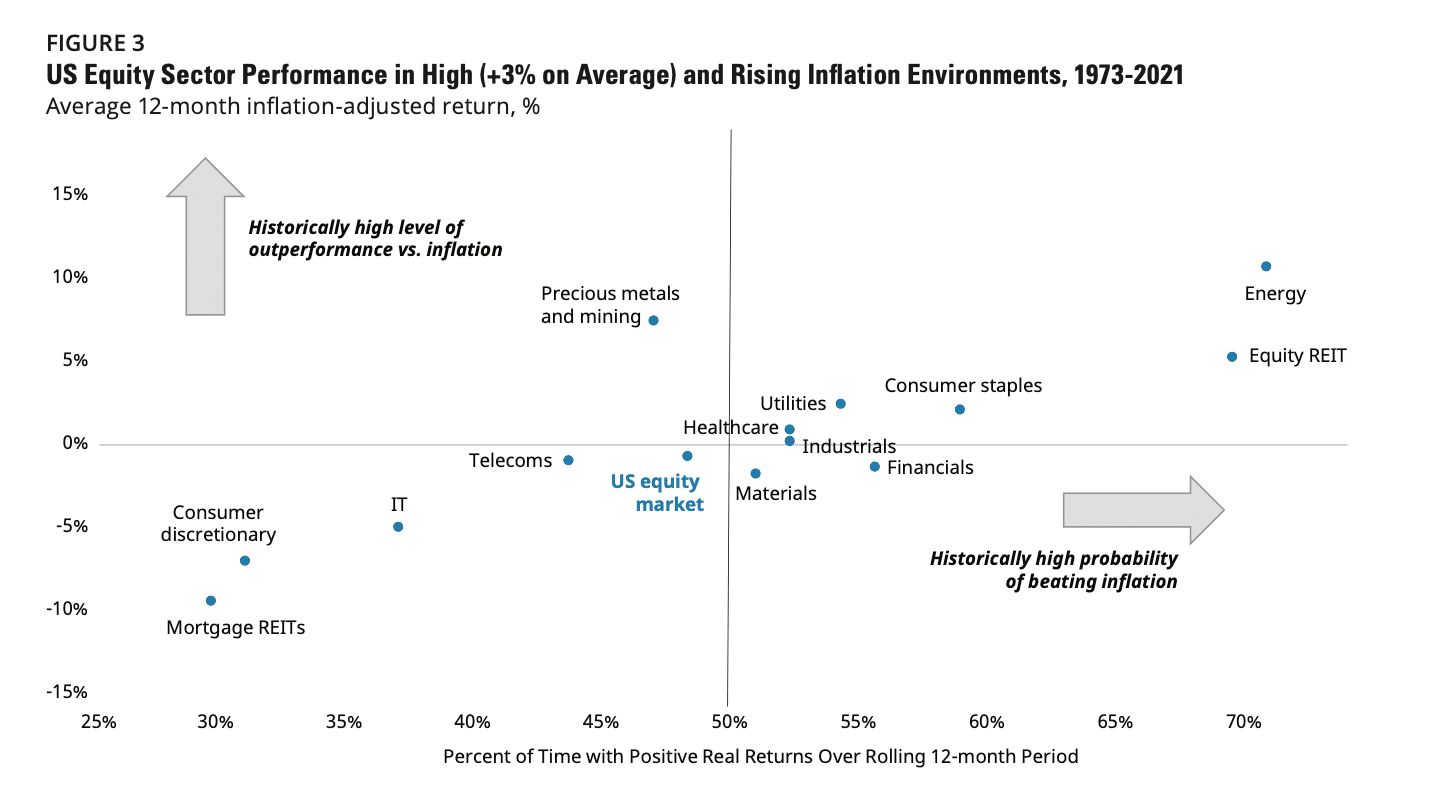 Clearly there is a high difference among sectors during inflation.

In the top right quadrant we notice Energy and Equity REIT Indicating they have positive real returns and a high probability of beating inflation in the subsequent 12 months.  Consumer Staples and Utilities also fall into the upper right quandrant, albeit at lower placement.  This is to be expected as they both have relatively inelastic demand and high exposure to real assets.

On the flip side, in the lower left quadrant we have Consumer Discretionary and Mortgage REITs.  This is interesting as it shows there is a huge difference among the performance of REITs that hold physical assets vs those that get exposure to real estate via financial instruments.

When it comes to short term investing during inflation we can clearly see that there are a few asset classes that do well.  Gold, REITs, Commodities, and Energy (sector) all are likely do better than stocks, although they perform differently.  For this reason if an investor wanted to adjust their portfolio for inflation I would propose they simply hold an equal weighted basked of those four asset classes.

Of course timing the move in and out of this basket of 'inflation beating holdings' is a challenge.   One way would be to look at the CPI on a monthly basis and see whether it is above the thresholds of high inflation in the data above -- 2.5% from Blackrock's analysis or 3% in the Hartford analyis.

I went ahead and looked at current data.  Using either 2.5% or 3% as a threshold we entered an inflationary period as of the data for April 2021, which reported an inflation rate of 4.2%.  This data would've been released on May 10th 2021.  Since then here's how those 4 asset classes have performed using representative ETFs as their proxy.

One thing to point out is that, I used a Vanguard's REIT ETF which does include mortgage REITs.  As indicated by the Hartford data, mortgage REITs perform poorly during inflation so an alternate REIT focused on real assets such as Invesco Real Assets ESG ETF IVRA may be a better choice.

While this concept may work well during inflation as we look at it here, the actual 'robustness' of it is questionable and would require further substantial backtesting.  For that reason, I would personally do more than allocate a small piece of my portfolio to this basket of assets during inflationary periods.

The concept outlined above may perform well during inflation, long term there is a different story.

Over a much longer horizon stocks deliver the highest return above inflation of any asset class.  So rather than trying to tactically move in and out of inflationary assets, over a long term having exposure to stocks is the way to beat inflation.

Bottom line, while broad market equities may lag during inflationary periods, over a longer term they do outperform gold and inflation!