So you want to get leads from Facebook Ads at as low of a cost as possible?

I know a thing or two about that!

There's really two approaches you can take to generating leads from Facebook ads.

All things relative, that $73,374.17 has brought in millions in revenue for my business.

On this page you'll see my ads, my landing page, and the screenshot from my ads manager account.

Let's break it down.

There's basically 2 approaches you can use if you want to generate marketable leads on Facebook.

These forms are built into Facebook.  The user clicks on the ad and the lead form pops up -- in most cases pre-filling some of the information.  These ads are created using the 'leads' objective when you create a new campaign.

You can see below just home smooth this is to the user.

The down side to the form is that you really don't have anywhere to 'edit the page' and ad sales copy.

This is a little more clickfunnels-esque.  From Facebook the user goes to a landing page, where you can customize to your hearts desire what is there.  Once the user completes the landing page a conversion event is fired back to facebook. 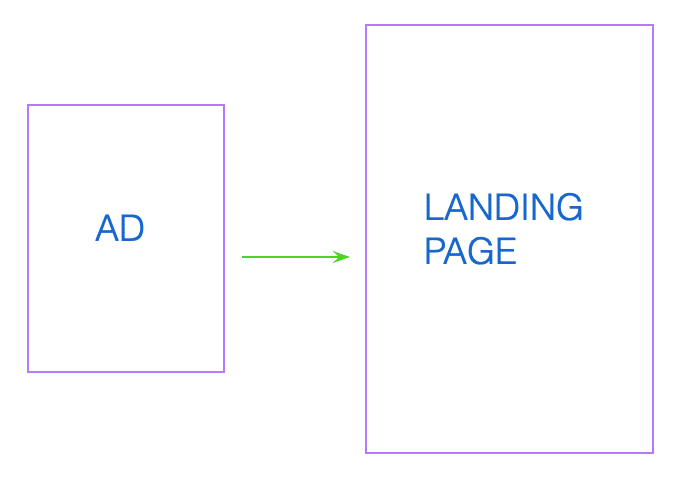 I find these a lot more difficult to set up as you now need another piece of software to make it function... the landing page builder.  Then you also have to edit create the page itself.

I'm going to address these because these are abuzz among amateur marketers.  I have not seen anyone generating marketable leads with messenger bots.  I have spent thousands of my own dollars on it.

Next time you see somebody touting lead gen success with messenger bots, notice they probably only show proof of 'messenger connections'.  Those are damn near as easy a link click to get.  Actually extrapolating information such as phone number, email and house address by messenger bot rarely happens.

Going into this test I had already been successful with using the lead form ads.  I wanted to figure out if we could do better by sending them to a landing page.

As this test was using two different campaign objectives, by Facebook's settings, a true split test would not be possibly.  Instead I would simply run each campaign (one for 'leads' objective, another for conversion objective), at the same time and to the same audience.

For the ad, I used one of my video ads that had been successful using the lead forms already.  I would keep the ad basically the same for the conversion campaign.  As you can see below the only the difference would be the display of a URL.  If the lead ad were created today, there would be a denotation of 'Form on Facebook' on the lead form ad. 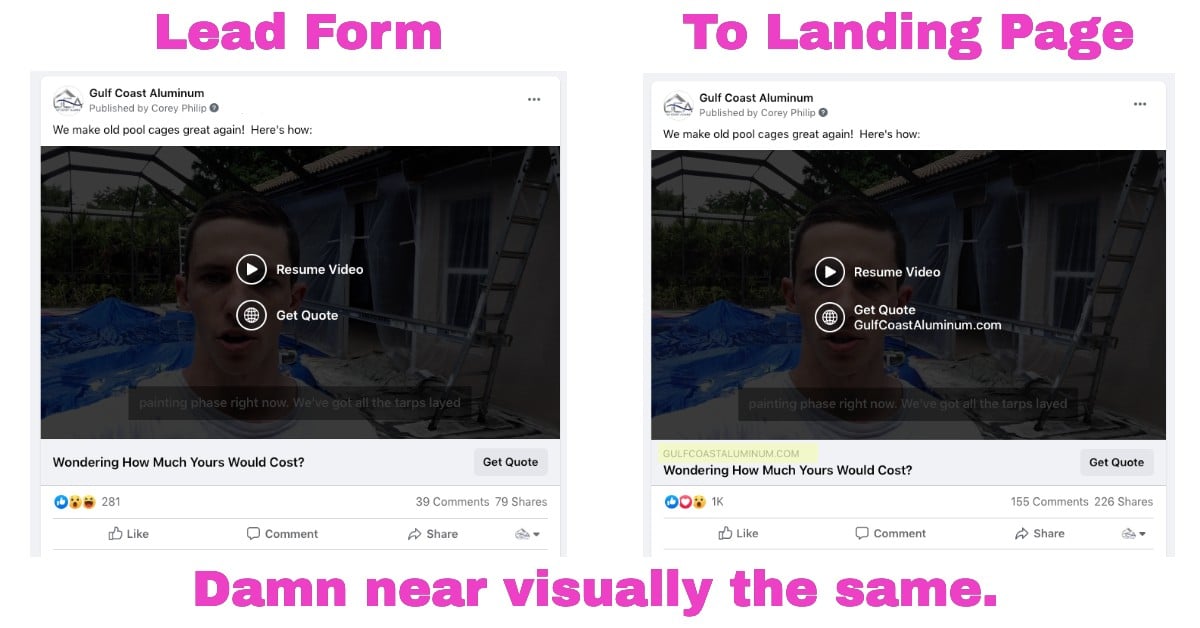 It was a short video of me walking around on one of our job sites, explaining the process for the service we were offering.  There was nothing fancy about it.  No professional editing, not even an external mic.  Just a simple walk and talk.

Going into this I knew the lead form 'worked' and generated leads at a relatively good price.  Considering that I figured I would create a landing page that was visually similar to the lead form when loaded on a mobile, but I would give it a 2 little edges that damn near always works in improving conversions...

Take a look at the landing page.

I kept it one narrow column so that is was fundamentally the same on mobile.

I included a picture of some team members in front of a company truck just on top of the form.  This shows people that we're 'non scary' real people, and that we've got assets to do the job.

Below the form, I put a gallery of happy customers holding our company sign in front of their completed projects.

At the bottom was a button that would jump them back up to the form.

For those wondering the page was built on Clickfunnels.

As I was testing this using my local business, the audience was kept to our local area and has a size of about 150,000.  I'm not going to get into the specifics of it, but exactly the same audience was used for each campaign.

How it turned out (results):

After running the ads for about 1 year,

I figured it was time to share the results publicly.

So here is the money shot (get your mind out of the gutter) straight from the ads manager.  You can click the image to enlarge.

Neither one really performs better than the other.

This doesn't mean we have nothing to take away though.

What we can take away.

When it comes to direct response marketing you'll hear the saying "the audience and the offer matter more than anything".  This drives it straight home!

Our audience was the same.

Our offer was the same (the offer is simply 'Get a Quote').

Regardless of what we put between the audience and the offer, and what the user has to do (leave Facebook, wait for a page to load, and hit a few more keys), the outcome was basically the same.

If you're one of those people that spends hours tirelessly designing 'the perfect funnel', testing 1000 variants of bullshit, and dumping money into the slot machine of Facebook, JUST STOP.

I know there's many of you out there.  And I've personally been sucked into that trap of trying to make a 'funnel happen'.

If a mediocre funnel does not work, your audience or your offer needs to be radically shifted... little tweaks of your funnel won't matter.